When we were asked to create an app for the biggest technology and progress conference in the Baltics  “Login 2014“, we saw an opportunity to get real hands-on experience with beacons and delight visitors with a new experience. It was a good chance to start small but firm and test how beacon technology can enhance future use cases. We are Lemon Labs and we’re ready to share our experience from the first event with beacons.

The Login 2014 conference was a 2-day event with visitors and presenters speaking two languages, so when we thought about use cases we need to take that into account. Additionally, we did not wanted to display the same messages over and over again, so we developed 2 variations of each message. Conference partners were very enthusiastic about this opportunity and we had no trouble finding companies who wanted to try this new way of reaching a customer.

Use cases varied from simple greeting message when entering a venue to brand awareness campaigns by big corporations. We even had our own use case, where a beacon wrapped in tin foil was unwrapped during our presentation, triggering a wave of notifications.

Here are few examples of messages we used: 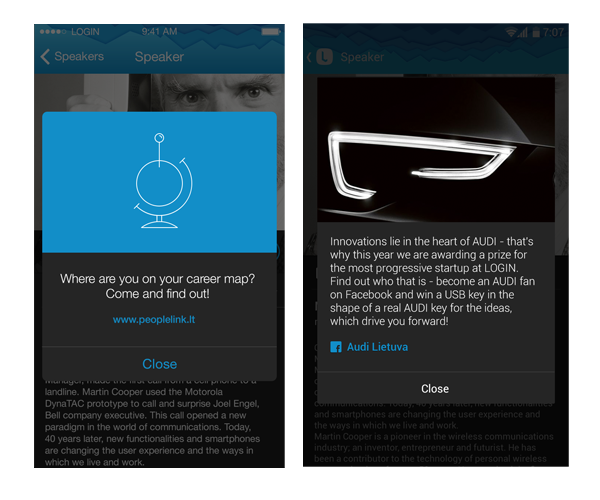 While our iOS and Android applications had the same functionality, they had one big difference and it was how they handle beacons.

When the app is running in the foreground, everything is nice and smooth – both iOS and Android beacons are detected in a matter of seconds. But the more interesting part is background, which is the most likely state for the app.

Apple introduced OS level service for beacon scanning starting from iOS 7.1.  This means that even if your app is closed, iOS will notify the app that beacon is in range. In theory, this should happen in near real-time, although Radius Networks had different experience (http://developer.radiusnetworks.com/2014/03/12/ios7-1-background-detection-times.html ). In our experience it varied, but stayed at a more or less reasonable level.

In Android however, there is no such OS level service for beacon scanning in the background and you need to create you own service just for that. As with any running service on Android, it drains the battery – the only question is how much.  Well, it depends on how often you scan for beacons. Based on our tests, 30s intervals between the scans has very little impact on battery life (the service consumes 1-2% of battery life).

In general, beacon scanning frequency is a major factor to take into account when designing user experience around beacons.  If you want to place a beacon in your shop to promote generic message- it’s not a deal-breaker, but if you want to notify the user about discounted items at the particular place down the isle, success rate might be very low simply because users walk by the place during the idle period of beacon scanning service – which statistically is more likely to happen.

In our experience, a general rule for designing beacons UX is not to bet on short interactions with “immediate” location beacons – there’s a higher probability that user will miss it and so it should less often be used in real-life scenarios, at least for now.

When the big day has come, our team eagerly waited for the visitors reaction. In a nutshell – it was a success but there were 3 challenges which we would like to mention.

The first thing we noticed when we came in the morning – one beacon which we placed outdoors stopped working completely (it was cold outside the night before). Thankfully we had spare beacons with us and replaced it quite quickly. That caught us by surprise, because the beacons we used were waterproof and brand new.

This little misfortune didn’t hurt our enthusiasm as the show went on. After talking with some visitors we quickly discovered our second challenge that certain users with iPhones do not receive messages even though the settings were correct. Reboot helped to solve the problem and only recently we discovered that iOS 7 bug was to blame – http://beekn.net/2014/05/beacon-bug-apple-loses-ibeacon-ranging-drives-developers-mad/ .

Last but not the least, visitors with older Android phones were quite disappointed when they found out that BLE is only supported on 4.3+ devices. Android fragmentation makes it difficult once again to promote beacons among Google-loving users.

Overall, people who did received the beacons seemed quite intrigued – it was different for them than a generic push notification they were used to getting randomly.

As the conference neared its end, all beacons were still in place and fully operational. We had integrated analytics into our app so as the event ended we went to check the results.

In total, there was a bit over 2,200 application downloads for both iOS and Android (the split was about equal).  For comparison, there was 3,000 visitors so in general 2/3 of the visitors had the app installed.

Below are the statistics about how many times the beacons were triggered during the conference:

For iOS case the beacons were detected 5100 times, or about 5 different beacons per user. Out of these triggers, 1763 times the message was opened. The conversion rate was 35%, which is a good result compared to overall ad efficiency.

In Android, however,  detections were twice as low as iOS, despite equal number of downloads. Most likely it’s because of fewer devices sporting a 4.3+ android version which is required to detect beacons. On the iOS side, all phones starting with iPhone 4S support beacons, which leaves only one unsupported model – the original iPhone 4, which is disappearing from the users pockets at a rapid pace.

Other important difference was the Android conversion rate, which was more than double compared to iOS. This might be happening for a few reasons:

iOS 35% does not look so impressive anymore compared to android’s 83% and taking into account that beacon support in Android will only get better with time, after few years it might offer very compelling use cases for the masses.

Overall, we were quite happy with the results – there were no big failures and people seemed positive about location-based advertising. By carefully selecting use cases and adding a bit of extra work, everyone could enhance their events with new approach to advertising.

Vytautas Sernas is a product manager at mobile product design boutique Lemon Labs. They help startups and companies to migrate their online business to mobile and optimize it for growth. You can follow the company on twitter @lemonlabs.

5 thoughts on “Apple, Android and Beacons: Lessons from a Live Event | Guest Post”